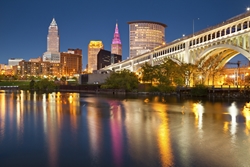 Northeast Ohio is in the middle of a renaissance period.

Dubbed the "Powerhouse in Middle America" by the Northeast Ohio International Business Network, the region has continued to live up to the reputation it has maintained since the early 20th century - an essential backbone of American and global commerce.

Like other Rust Belt strongholds, the Cleveland area has seen its share of challenges in the past few decades as widespread economic changes took hold and reduced the region's influence as the sole epicenter of American industry. Because of this shift, Cleveland's population declined from more than 1 million in the 1950s to 400,000 at the last census. The rest of the Cleveland-Akron region has seen only marginal growth, with roughly 2.8 million living in the area in both 1960 and 2012, according to U.S. Census Bureau estimates.

But over the last 20 years in particular, Cleveland and all of the municipalities in Northeast Ohio (Akron, Canton, Cleveland, Lorain/Elyria and Youngstown) have begun to reclaim their status as one of the key pillars supporting the United States' position as an economic superpower. Consider these statistics from the Northeast Ohio International Business Network:

"The energy is pretty awesome," architectural designer and Cleveland resident Michael Christoff told the Architectural Record in 2012. "If at least some of those twenty- or thirtysomethings stick around to grow new companies and raise families, Cleveland just might achieve its dream: a self-sustaining wave of reinvestment that leads the way to an even bigger rejuvenation."

Throughout this renaissance period, businesses across the region will require access to an Ohio courier service they can trust. Reliable Runners services hundreds of clients across Northeast Ohio, including many of the Fortune 500 companies that are based in the area. Our chief goal is to provide affordable, consistent services to our clients, all while emphasizing communication, professionalism, integrity and accountability.

Reliable Runners is a small yet integral part of Northeast Ohio's burgeoning economy and continued financial strength. Much like the region we serve, we are committed to reinvesting in ourselves to better serve those who rely on us. Without investing in technologically advanced solutions like eZrunner™, we would not have achieved operational excellence and the unmatched local reputation we currently boast.

Since the 1970s, Northeast Ohio has gradually undergone a shift of its population, away from urban centers like Cleveland, Youngstown, Akron and Canton, and toward the suburban regions connecting them. This trend toward sprawl - in which former urban residents fill in areas that were once sparsely populated - is one that has been seen nationwide, but it's even more notable in Northeast Ohio, where a population decline and shift are occurring simultaneously.

As Northeast Ohio responds to the ramifications of these changes, area businesses are making steady improvements. A 2013 survey by Chief Executive magazine named Ohio the "most improved state" in its annual rankings of the best business environments in the country. While Ohio is still only in the middle of the list of states overall, its upward trajectory bodes well for future development.

Cleveland is uniquely positioned within 500 miles of some of the most prominent hubs of international business, including New York, Boston, St. Louis, Chicago, Charlotte, Philadelphia, Detroit and Toronto. More than 50 percent of all U.S. effective buying power is contained within that same 500 mile radius, according to the Northeast Ohio International Business Network.

From that centralized location, Northeast Ohio supports several prominent industries that rely on expedited shipping services to maintain their operational and financial performance. The region's primary industries include:

As one of Ohio's top logistics service providers, Reliable Runners provides its clients with the peace of mind they need to function in today's global economy. We've proven over three decades that we understand the Northeast Ohio region and the specific transportation and distribution needs of our clients. Our portfolio of literally hundreds of satisfied clients - with many in the Fortune 500 - is evidence of the premier, on-time service we provide.